I write new articles and publish them to Substack if you want an easy way to keep up. I hope you’ll subscribe!

The last post ended up having lots of responses! But the #1 question by far was:

Tell me about “Sony and the fight Greg and I had at SFO that resolved one of our main founder arguments in the early days.”

Everyone wants to hear about fights.

I might be mixing two stories together. Here the broad strokes.

This is around late 2010. We’ve built out the first Dropcam hardware product using an Axis M1011-W camera and we have the cloud service running with our seed funding. We start selling a few and begin making some very small noise on TechCrunch. 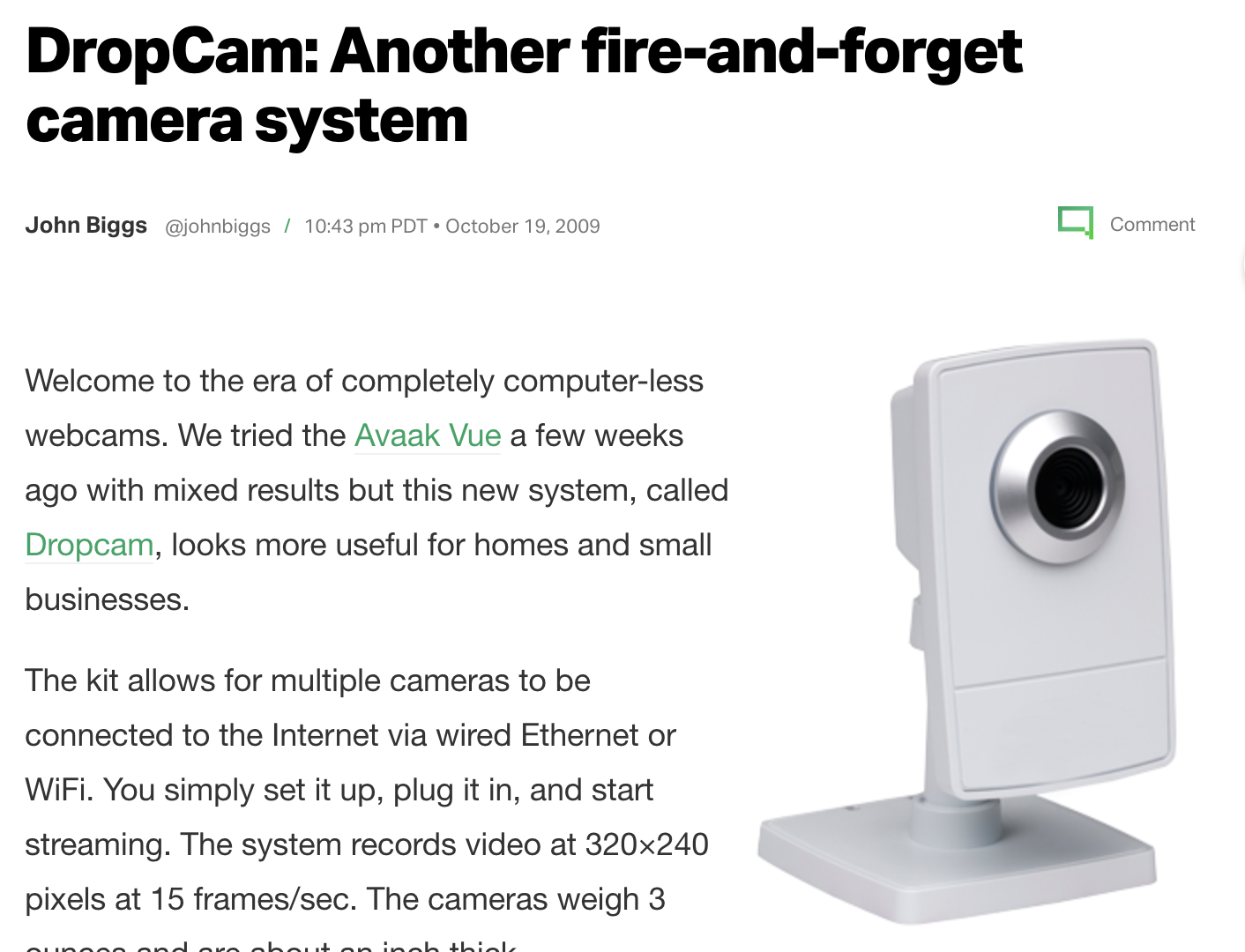 We’re also making some noise in the IP camera space because we are buying “a lot” of those Axis cameras.

Somehow we get in touch with Sony’s corporate development group. We start talking to them, driving down to their San Jose offices, showing them the camera’s easy setup and how it could apply to their own cameras. More importantly, the subscription cloud service is also valuable and could ingest video from anywhere, including Sony surveillance cameras.

Having worked on this idea for under two years and still having waaaaay less than 1000 paying customers, I’m excited. Greg seemed like he was, too… but I remember him taking it a little less seriously and not preparing as much as I’d like.

So we have a flight at SFO after one of these meetings, and Greg was late. I went off on him about that when he arrived, and I’m animated and yelling about how he’s always late and not taking things seriously with Sony and I start talking about how he’s not doing a good job as CEO and…

Yeah, I went there.

So he gets riled up, too, and we get on the plane and keep arguing and talking about decisions and… honestly the rest is a blur.

I just remember being on the plane sitting next to him and things being awkward. We talk things through, with the end of the argument coming when Greg says,

Hey, you signed up for this. You agreed that I was CEO and I get to make these calls.

I go quiet. Did I sign up for this?

Greg and I knew each other from working at Xobni1 as software engineers. There was a talent exodus in late 20082, and we would meet to talk about ideas since we liked working together.

Dropcam emerged as an idea from Greg and we got together, talked about it, and I decided I’m in. We met at Little Shamrock one evening under Greg’s apartment and started talking details. A napkin (or maybe it was a notepad ;o)) was written on: 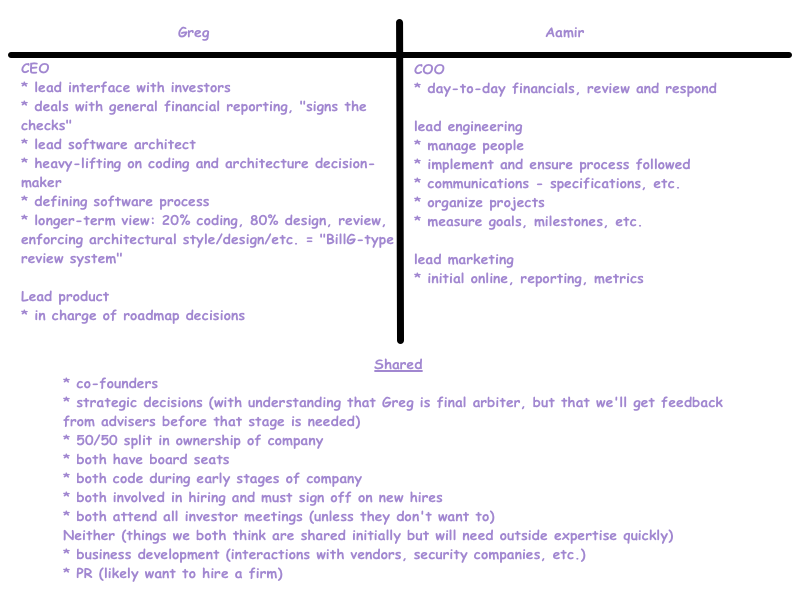 Yes, we did write this out. I know most founders don’t do this, but we had seen enough ugliness from Xobni, and we really wanted this to work.

Yes, things shifted from what the napkin said - product and engineering melted together during those first few years, and business development work happened as part of the hardware and sales operations we hadn’t taken into account, lots of things are missing… Basically we engineers underestimated the non-engineering portion of the business3.

Yes, Greg was right - I did say I understood that he was the final arbiter on strategic decisions.

I was still annoyed and angry - why should my opinion matter less just because Greg came up with the idea? We were both steeped in what was going on and invested in the success equally. I couldn’t just let him do what he wanted, right?

Rahim Fazal is a friend who was a few years into his own company as CEO around this same time. I met up with him later to vent.

His first piece of advice was to continue being an active participant in the discussion and playing the role of a good co-founder. Work as a team, argue in good faith, look out for each other and the company’s goals. Lead in your areas of expertise and responsibility.

If the company fails, all the blame is placed on the CEO and you get to say ‘Well, I was a founder and now it’s my turn.’

If the company succeeds, all founders get the halo effect and you get to say ‘Well, I was a founder and now it’s my turn.’”

Rahim talked me off the ledge. He reminded me that I had indeed signed up for this. I said I wanted to work on this idea with Greg and that he was CEO.

I went back to work.

It took a while (like another year), but I tried to be more empathetic and supportive as a co-founder by filling the gaps on all the random things that needed to get done related to our developing strategy. And when there were unclear moments, I would try to bring data (on markets, companies, products, users, whatever) to the table so that our conversations weren’t just “he said, he said”.

The reality is that Greg was the best person for the job - he had incredible knowledge about the underlying video and cloud technical details, and he was a good storyteller about Dropcam.

I mean, how many times did he talk about his dad and dog poop?

Oh, the Sony talks were dumb. They didn’t go anywhere. Our last meeting with them was a day where Greg went to present and saw another camera startup walk out right before he went in. After that we thought they were just digging for their own research and not planning anything serious.